A healthcare, aged and community services consulting company designed a database system using Zoho Creator and Zoho Analytics  prior to seeking Oscillosft’s expertise. Oscillosoft has worked alongside the company to improve the functionality and produce an improved program. They then worked collaboratively with the company to upgrade the program resulting in a streamlined application with enhanced functionality.

Bailey Consulting & Training (BCT) are specialty providers of customised and integrated services within the aged and community care sector who are committed to providing excellence in service, process, performance and systems. Over the course of their 20+ years of experience within the industry, BCT recognised that the most successful aged and community care providers were always looking for ways to continually improve their service offering. In addition, the government regulations are evolving at a rapid rate, which amplifies the difficulty for care providers to keep on top of the changes and remain compliant. There weren’t any systems in the marketplace that were specifically designed to assist the sector with effective data input and subsequent analysis and as such BCT began the process of designing a purpose built tool that they named CIDA, which stands for Continuous Improvement Data Analysis. This initial application was developed but was not functioning to its full capacity, in addition as the program needed upgrading it was agreed with OscilloSoft that the platform would be upgraded to Zoho Creator 5. Once the initial concepts and solution design had been planned out, BCT turned to Oscillosoft to develop and transfer the very complex underlying technical platform and also subsequently engaged Customer Consulting Group (CCG) to also assist with various elements of the project. Together BCT, Oscillosoft & CCG have teamed up to build a solution like no other that provides aged and community care providers across Australia and New Zealand with an intuitive and the very best practice platform to remain compliant with the ever evolving regulations and continually improve.

Prior to working with Oscillosoft, BCT had been working on the application, however the program was not functioning as it should, and whilst Oscilllosoft worked alongside BCT to improve the system which consisted of over 400 forms and reports to capture the data, the application was  not intuitive or user friendly. Oscillosoft recommended that the program should be upgraded to Zoho Creator 5.

The custom application needed specific integrated forms which provide reports through dashboards that  are updated hourly. A basic onboarding data form needed to be developed as its foundation . The data from this form needed to be assimilated into all forms and dashboard reports which is updated each time the form is used. The challenge was to develop a high number of forms and reports forms and have them integrated into reports whilst improving the user experience. Over 400 forms which included audit tools, data entry forms and surveys have been developed.

Oscillosoft worked collaboratively with BCT and CCG to re-design the application using Zoho Creator 5 to produce a smooth running integrated custom application with the features given in the graphic below. Zoho Analytics was used to build dashboards that were embedded into the application. 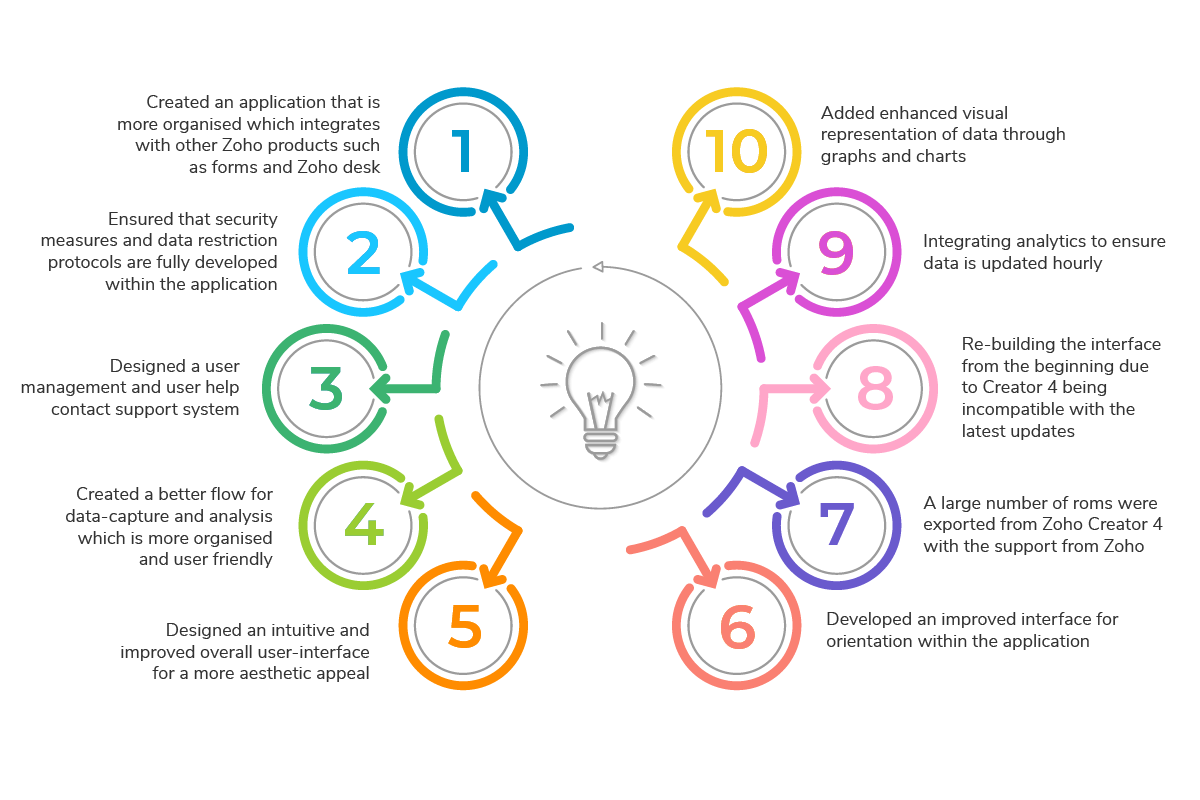 Upon the implementation of the new application into BCT Pty Ltd systems, the following results were noted